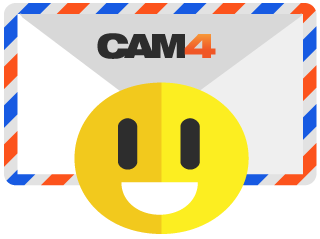 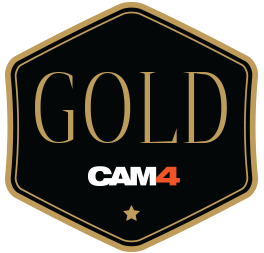 This Feature Is A Gold Exclusive

Support CAM4 today. Upgrade to Gold and get access to these amazing features:

Oops! This email address is already in use on CAM4.

Please use a different email to receive your tokens:

Or transfer your tokens to your existing CAM4 account:

Enter your email below to retrieve your login info 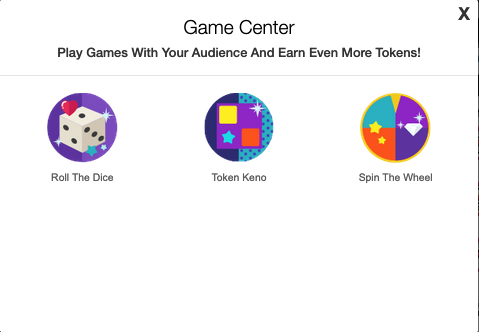 In this game, the broadcaster will have to set a price per roll and set up 6 prizes. The game cannot be started without all 6 options (dice faces) and a price being set. 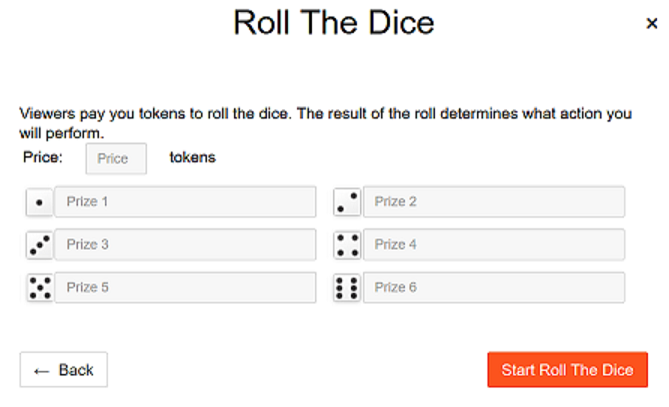 Once the game is started, all viewers on the room will have the Play Roll the Dice button in the action bar under the player, and will receive a chat notification that the game is active and the possible prizes. 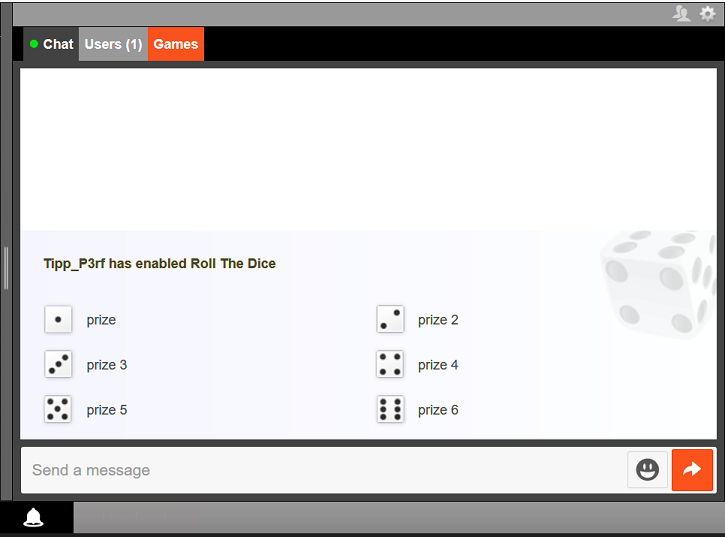 Once clicked the Play Roll the Dice button a game window will be opened over the chat. Here the viewer can see the price per roll, the prizes that they can win and a Roll The Dice button, which will randomly choose a prize once it is clicked.

After a roll the game will be paused for 1 minute,  to allow time for the broadcaster to give the reward that was won. If they don't need that much time, broadcasters can reset the timer.

In this game, the broadcaster can set up to 12 prizes with the cost they choose. An option to be added to the game must have a prize and a cost. To start the game the broadcaster has to click on the Start Token Keno button. Once the game is started the options cannot be edited. A chat notification will notify all users that the game is enabled. 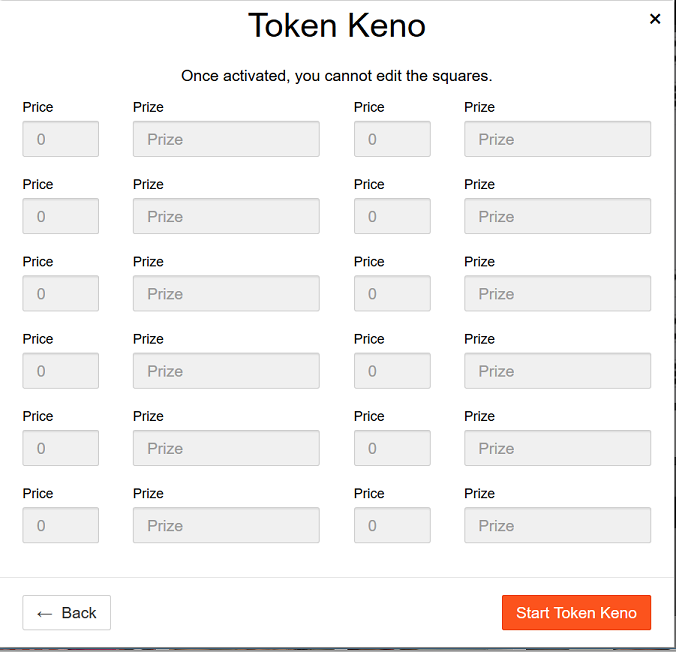 All viewers now can see the Play 'Token Keno' button in the action bar under the player, and if they click on it, the Token Keno game window will be displayed over chat. Here they can see a list of the prizes they can unlock and the squares they can choose with the cost to unlock them. The viewer is not aware of which prize the squares have. To play the game the viewer has to click on the square he wants to unlock. Once he clicks on the square an animation is displayed with unlocked prize.

A chat notification is sent to inform all users that the viewer unlocked a prize. After a pick the game is paused for 1 minute,  but the broadcaster has the possibility to resume it faster by pressing the Allow Unlock button that replaced the Game Center button. The unlocked prizes are displayed in the game window as greyed out and strikethrough. After the last square is picked the game ends.

The broadcaster can end the game when ever they want, to do so they have to go to the game settings window and click on the End Token Keno button. 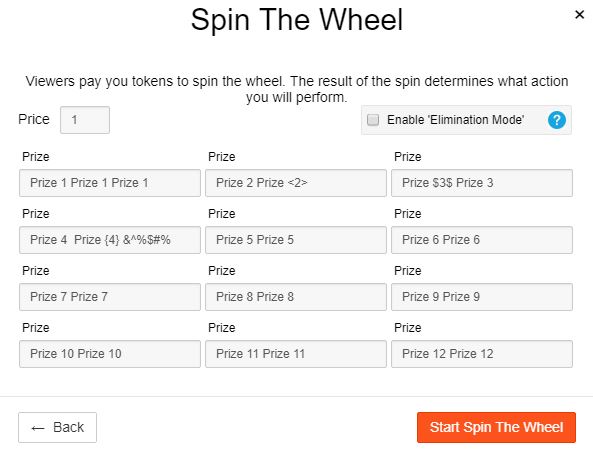 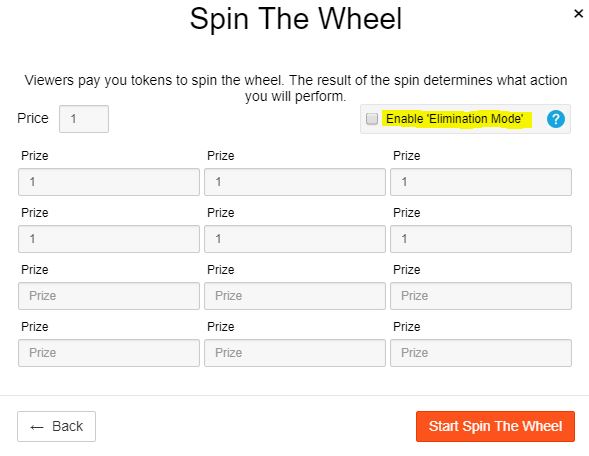 The viewers will have to pay the price to spin and win a random prize. After the game starts, the "Game Center" button will be replaced with "Spin the Wheel", on the broadcasters side.
After the broadcaster starts a game a chat notification will be sent to all users with all the prizes in the game. 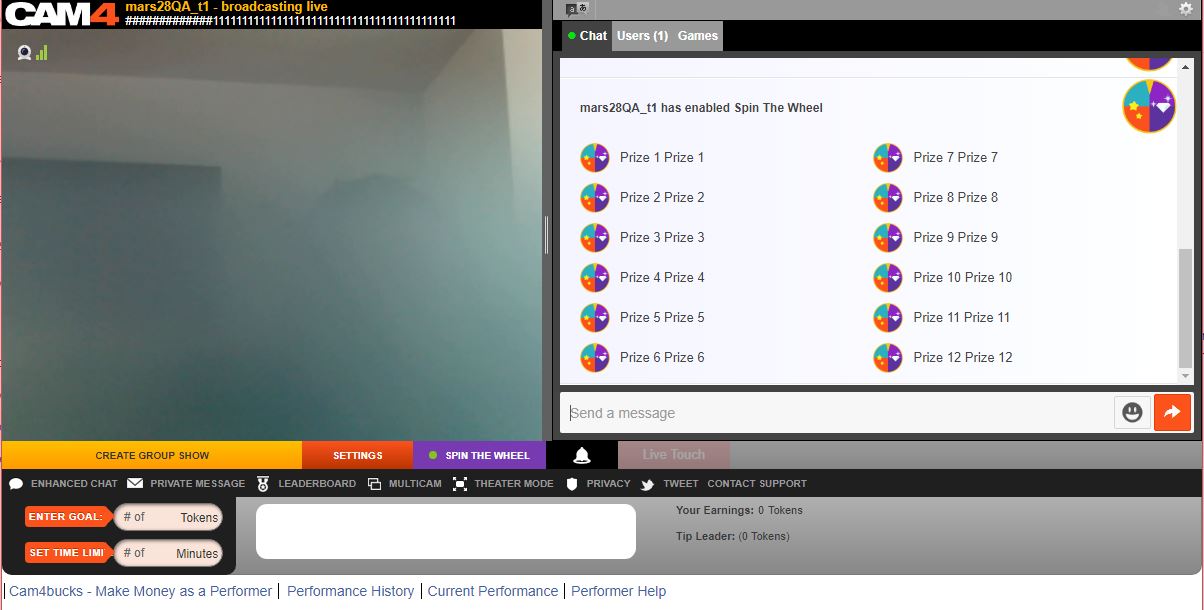 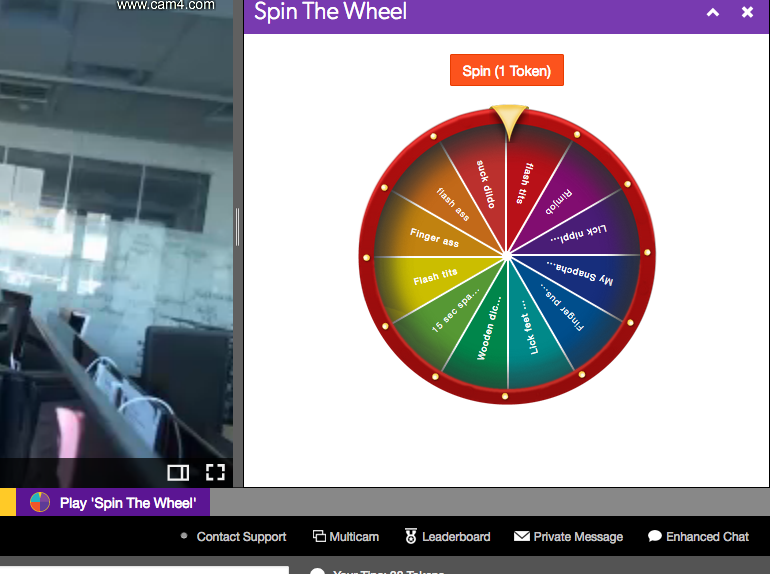 A chat notification is sent to inform all users that a viewer won a prize.

After a spin the game will be paused for 1 minute, but the broadcaster has the possibility to resume it faster by pressing the "Allow Spin" button that replaced the Spin the Wheel button.

The broadcaster can end the game whenever he wants, and he can do it by clicking on the the "Spin the Wheel" button and the press "End Spin the Wheel".

Please correct the errors as indicated below

Your account is suspended until we can confirm you are 18 years or older. Please submit your photo identification to agecheck@cam4.biz